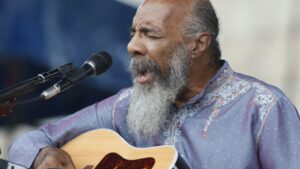 Richie Havens, a rock great known for his riveting impromptu performance of “Freedom” at Woodstock in 1969, plays at Opus 40’s first large public event. During his set, a bolt of lightning crashes a mere 40 feet away from the stage. Havens will later recall the natural occurrence with excitement, stating that he “didn’t move, I just stayed there. People thought I was nuts.” In the same interview, he explains the beauty of Opus 40, telling the interviewer that “it just has some kind of mystical thing. People who go there are drawn back there.”